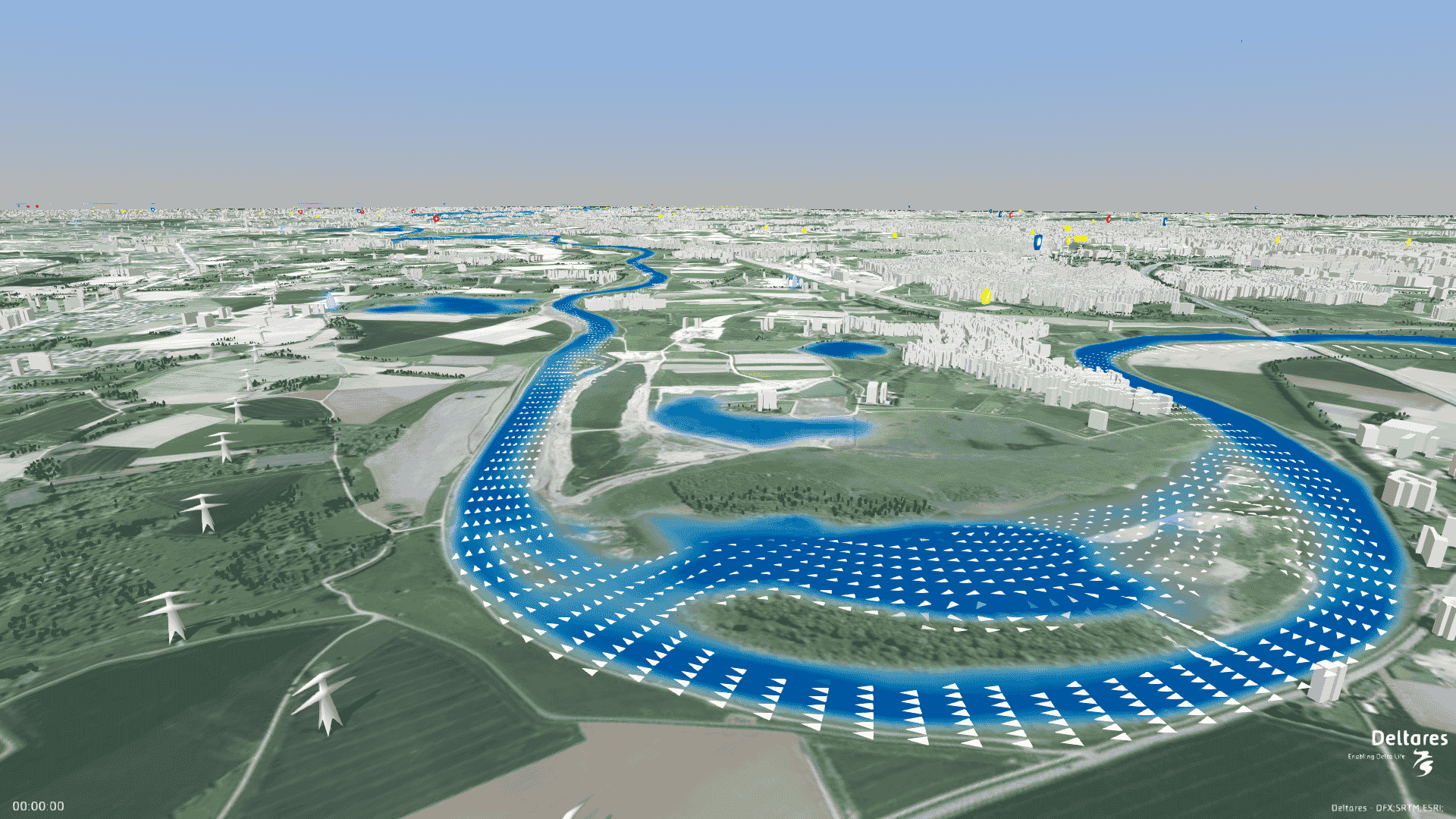 Adaptation of rivers, both hydrodynamically and morphologically, is a
process that involves large spatial and temporal scales. Especially when
you want to look at adaptations due to climate change (sea level rise,
changes in discharge regime) or due to large scale interventions in the
system. It is therefore of utmost importance to be able to predict the
(long term) development of rivers on larger scales. This gives the need for
appropriate numerical models and accompanying software.
The RiverLab focusses on larger spatial scales and (long term)
morphology. With these requirements a iD modelling approach, with 2D
and 3D parts where needed, appears to be the best choice. The widely
used iD simulation software for rivers, the SOBEK-suite, does not fulfill
the demands that are currently set for the support in integral river
management. For this purpose, the RiverLab utilizes the ‘state of the art’
D-HYDROSoftware Suite that integrates multi-dimensional approaches in
one package. D-HYDROSuite is a dynamic modelling platform, where
innovative water software meets and connects to the continuous change in
problems coming from the water sector. D-HYDROis an open source
product and has a large (international) user community.
The core of the D-HYDROsoftware is a completely new computational core
(D-Flow FM), which has been developed in the past years, in first instance
with a focus on 2D applications (with a novel flexible mesh approach) also
in combination with morphology. Lately the development for 3D
applications has been further enhanced and also the application to lD-2D
systems for the regional water boards and rural areas is taken into
account. However, the possibilities for ID modelling of rivers is lagging
behind and further disclosure of specific features for this application is
needed to be able to perform integral river studies.

The overall goal is to boost integral river modelling both nationally and
internationally to be able to answer complex questions in the future. This
is done by developing and disclosing specific modelling techniques within
state of the art software (D-HYDRO Suite) and make them available to the
whole river community.
This overall goal related can be divided in multiple sub-goals:
• Improving the 10 functionalities within the hydrodynamic
computational kernel of the D-HYDROSuite (e.g. complex steering
of structures, supercritical flow).
• Improving the iD functionalities within the morphological
computational kernel of the D-HYDROSuite (e.g. sediment
distribution over bifurcations, sediment through structures).
• Testing the new modelling techniques in two international pilot
projects.
• Making the new software and testmodels available to the whole
river community.
Aforementioned goals contribute to multiple questions from the Kennis en
Innovatie Clusters (KIC’s), as described in this proposal in the section
“Relevantie van onderzoeksvoorstel aan primaire (en secundaire) Kie”.

Within this project the following activities will be performed:
• Implementing and testing of complex steering possibilities of
structures in ID within the D-HYDROSuite (2018)
• Improvement of the available general relations for the sediment
distribution over bifurcations and confluences in ID within the 0-
HYDROSuite (2018).
• Implementing a new sediment transport formula using a spatial
porosity distribution (2018)
• Validation of the application for ID supercritical flow in rivers
within the D-HYDROSuite (2019)
• Testing the new functionalities in a pilot study with Hydrotec on a
river in Austria (supercritical flow and complex structures; 2019)
• Testing the new functionalities in a pilot study with Jpower on a
river in Japan (sediment transport over structures and
confluences; 2019).
The validation of the test models is mainly done against analytical
solutions and already existing (2D) implementations. The models from
the pilot studies are validated against measurements as far as
possible.

Volgnummer Wat Wanneer
(jaar)
An alpha project version of the D-HYDRO
Software package with the new developed
functionalities
1 2019
Testcases for the functionalities in the
software
2 2019
Ca. 2 publications of the experiences
obtained from the pilot studies.
3 2019

D-HYDROSuite with the D-Flow FMcomputational kernel is open source
and therefore is distinctive from many other simulation packages. The
possibility to combine a ID geometry with 2D (and even 3D) is a strong
advantage. In this way you can improve the models in areas where this is
needed. The latter 2D (and 3D) approach make use of an unstructured
grid approach (with grid cell of random shape) which improves the
flexibility and makes it possible to align the grid with important features
and refine in important areas. In this project the 1D-functionalities are
improved, such that real integral river studies will be possible.
The advantage of using one integrated software suite is that functionalities
developed by other parties, such as universities, knowledge institutes or
engineering companies, can be easily used and combined (e.g. new
numerical schemes and other processes such as water quality, bank
erosion and waves). It is also possible to add functionalities via Pythonscripting,
without having to change the code itself. This allows researchers
and other users to adjust and extend the tools to suit their needs. The
open character of the software also stimulates further innovations and
development in the form of pre- and postprocessing tools by third parties
(researchers, consultants).
One of the innovative part of this project is to implement a general
sediment distribution functionality, which can be easily adapted by the
user. Also a new sediment transport formula will be implemented based
on a spatial porosity distribution (which will be available both for ID, 2D
and 3D applications).
Furthermore the developed (test)models are made available via
OpenEarth models and the RiverLab platform. In this way not only the
software can be improved by the total community, but also the numerical
(river)models itself.

The valorisation of the project consists of the following components:
Perfoming pilot studies and publication and presentation of the results of these
studies. This will be done during the duration of the project by Deltares in
cooperation with the partners. Goal is to share knowledge and generate new
project partners (government, industry, consultancy) that want to utilize the
innovative components from the D-HYDROSuite for river management.
Applying the software developments in new national and international projects.
With the developed software it will be possible to perform new integral
projects in the area of river management in the Netherlands and worldwide.
National pilot studies are already being performed at the moment (e.g. within
NKWK-Rivieren)and there is interest for the further development of the DHYDROSuite
by various international parties. The expectation is that during
2019 pilot projects can be performed with the new software components.

An alpha project Universities, industry, available for the
version of the D- knowledge institutes. partners via the web
HYDROSoftware The newly developed platform of the
package with the new functionalities in the RiverLab under a
developed software will already be testing agreement.
fu nctiona llties used in the pilot models.
Testcases will be
Testcases for the Developers of the adopted by Deltares in
functionalities in the software (Universities, the standard test
software knowledge institutes) bench of the software
and made available
from the web platform