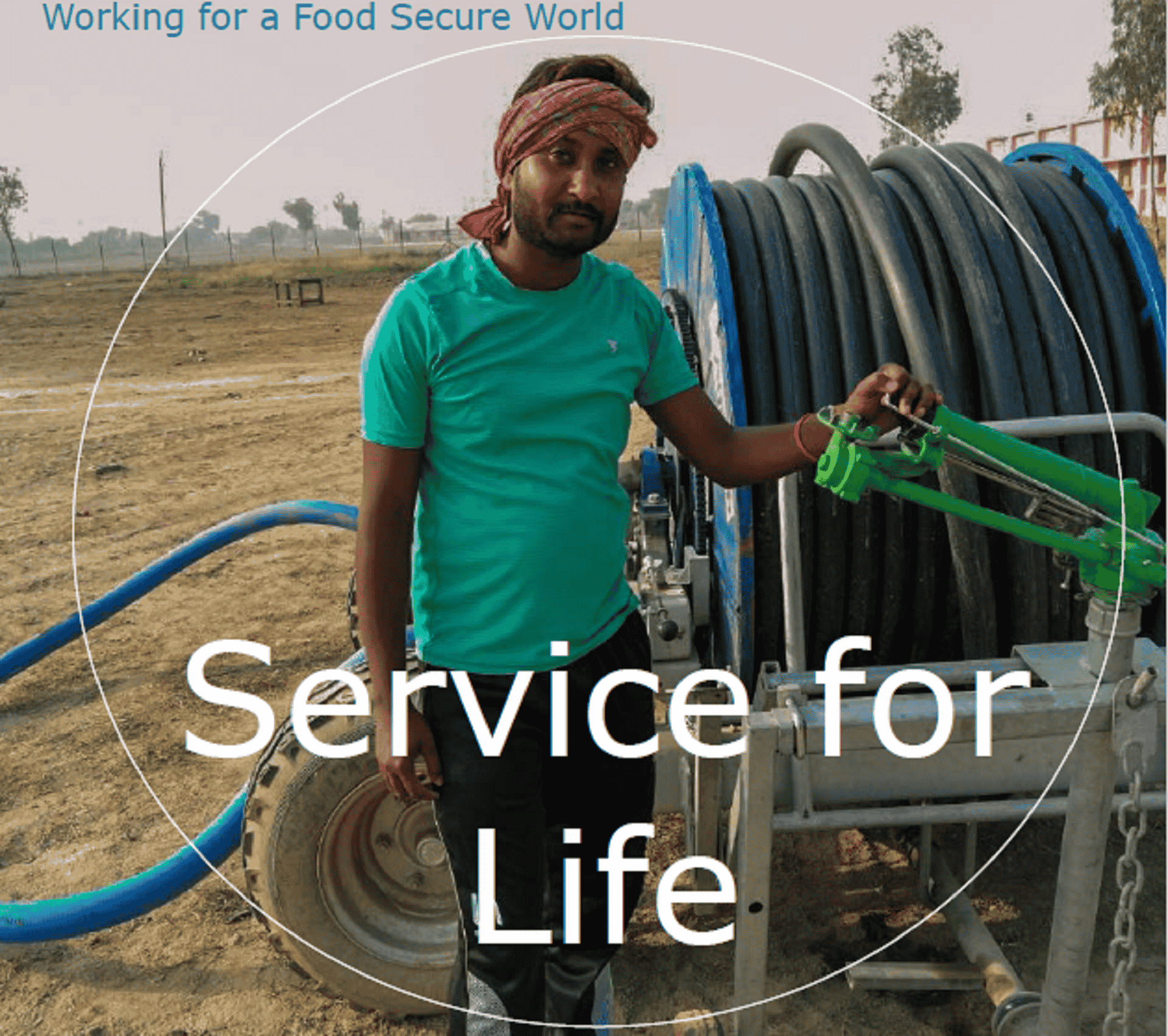 Regulated deficit irrigation can be used for enhancing water use efficiency as well as enhancing crop productivity per unit of irrigation water applied especially in drought prone areas. However, this approach requires precise knowledge of crop response to water as drought tolerance varies considerably by species, cultivar and stage of growth. (Deficit Irrigation Practices, FAO, 1996).

There is scope for introducing the “hose reel irrigation system” as an innovative custom-hirable service model which can be owned and operated by an agri-entrepreneur but delivered to end users (farmers) who wish to irrigate their fields as a service for a cost.

A prototype of a tractor drawn hose reel irrigation service model using water tankers (by hauling water from available sources in the immediate vicinity of crop fields and deployment on target crops by agri-entreprenuers) has been developed by Wageningen Environment Research and an irrigation company as a collaborative project called India Water Initiative undertaken between 2014-2016.

Through project AIMS, the consortium intends to achieve the following objectives:

- Scientifically verify and quantify the socio-economic benefits and return on investment of the developed prototype of custom hireable irrigation service model to target stakeholders (agri-entrepreneurs and farmers) by conducting field experiments in groundnut crop of Anantapur district in India.

The main purpose of the project AIMS is to scientifically proof and quantify the environmental benefits ans cost benefits (to both farmer entrepreneurs owning the machine as well as farmers going for deficit irrigation using the smart irrigation model) and draw up recommendation to facilitate scale up across dryland field crops in India Europe and Africa.

Climate change is impacting global rainfall patterns and as a result productivity of rainfed agriculture around the world is increasingly being affected largely due to frequent dry-spells and droughts. Sustainability and productivity of agriculture in irrigated areas is also under threat in key agricultural belts around the world due to depletion of groundwater reserves. Regulated deficit irrigation (or deficit irrigation as it is widely referred) can be used for enhancing water use efficiency as well as enhancing crop productivity per unit of irrigation water applied and is thereby an adaptive water management practice. Under scarce water supply and drought conditions deficit irrigation can lead to greater economic gains for farmers instead of losses being incurred due to drought and dry spells. However this approach requires precise knowledge of crop response to water as drought tolerance varies considerably by species cultivar and stage of growth. (Deficit Irrigation Practices FAO 1996).“Hose reel irrigation system” is an appropriate technology by which regulated deficit irrigation can be administered at farmers’ fields. However its utilization and large scale adoption by small and marginal farmers in drought prone areas is constrained by the lack of their affordability of this technology. A custom-hireable service model of irrigation can substantially bring down the operational cost for a farmer. However the cost benefit and climate impact (in terms of water conserved) by adopting this innovative business model has to scientifically proved and verified. This research cannot be carried out by modelling or under laboratory conditions as the research has to include all aspects of actual agricultural practises fertilizer application interaction between farmers and agricultural entrepreneurs investments and operation and maintenance costs and actual hydrological and meteorological aspects throughout a growing season. the field. Project A

The custom-hireable service model has not been standardized or adopted in any geography across the world. The technical prototype of this model was developed by Wageningen Environment Research as a collaborative project in India between 2014 to 2016. However the scientific basis on the accruable benefits of adopting this technology is yet to be established. Also the combination of foliar sprays of micronutrients in dryland crops is widely recommended by extension agents. However there is no affordable technology for small and medium farmers to facilitate this. Project AIMS will generate a “first of its kind” scientific content and evidence on both the above aspects.

Product Used by Action by

Syngenta Foundation for upscaling to potentially 100.000 farmers in India

• Through WUR website: www.wur.nl/TKI Deltatechnologie
• Publication in farmer journals in target areas and/or interantionally
• Through (Syngenta) extension workers and services

We are actively looking for partners to join to out scale the application in Africa (especially Ethiopia and Rwanda we have a very strong network and active projects) and also Eastern and Southern European countries (such as Italy, Spain and Bulgaria) where there is increasing incidence of dry spells and droughts on account of climate change.